DCO banners: Why it’s relevant for you as an advertiser

The popularity of DCO banners is increasing for a reason. There are huge benefits to be gained if you as an advertiser invest time and resources in developing DCO banners that combine data and creativity in the best possible way. The ads, which are based on the users’ data, may at first glance seem like an rather invasive way of doing business, but there is more to this type of banner ads than just data sucking.

DCO is short for dynamic creative optimization and it is a type of display ad technology that creates personalized ads. DCO banner ads convert based on data about the users, which figuratively speaking helps improve the ads by making them extra relevant for the users viewing them. The data that the ads use when converting can be basic information such as the user’s location but also other types of information such as the device the banner ad is being viewed on.

Using this data and combining it with the flexibility of the ad type, makes advertisers able to develop ads that are far more personalized to each and every user’s feed. In other words, a DCO banner carries more insight in who the user is and responds to this by choosing the best creative combination suiting the viewing user. The creative elements of the feed are not necessarily changed but the best message and information is simply selected based on the predefined and already developed elements available.

It sounds cool too, but what are your options really as an advertiser?
In general, a DCO banner can be summarised as the following: An ad where the content is delivered and generated using personalised data.

The most popular solutions are typically:

What we see in the market that works well is where you combine a well-designed ad with automatically generated content. One important thing in these cookie-less times, of course, is the personalisation of the ad.

We see several skilled advertisers developing self-propelled segments to suit the buying journey, after which a rule engine delivers the personalised ad based on the given segment.

This is something we at Zuuvi have helped customers develop, as we see it as an efficient and sustainable solution in a cookie-less future.

Here you see, for example, an advertisement on DBA.dk from Danske Bank. Depending on which accommodation you are in and looking at. And if you click on the ad, the price is transferred into Danske Bank’s loan calculator on their website: 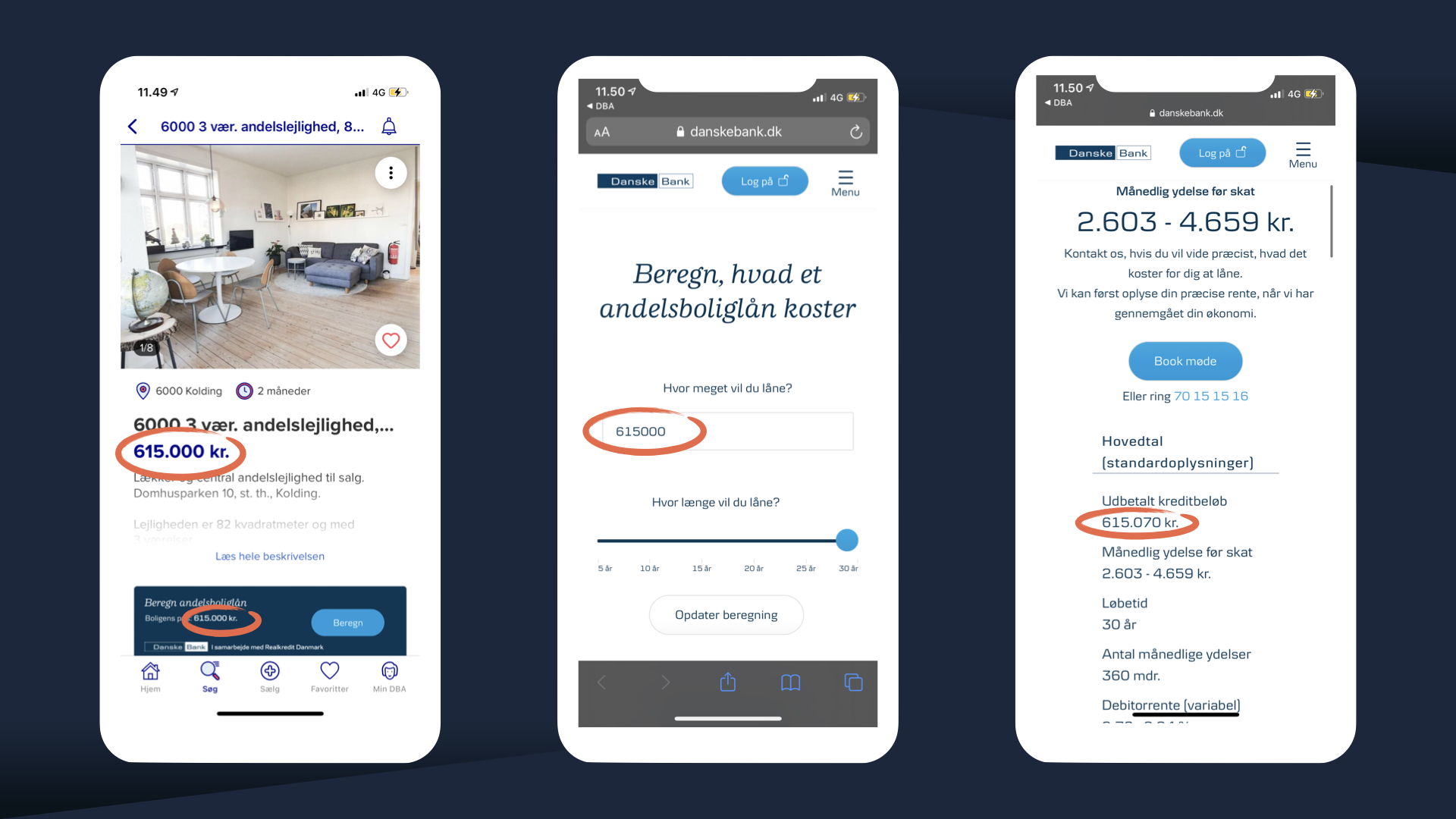 Why do DCO banners exist?

DCO banners are classified as the beginning of the end of standardised and impersonal ads. With DCO any advertiser can combine creativity with relevant data for the production of the ads. It is a valuable cocktail in a world of standardized, uninspiring ads.

Despite the fact that DCO banners are old news, the development and the trend of their use in marketing is increasing and is therefore necessary to pay attention to. Data-driven advertising is becoming increasingly popular for a reason, as its potential definitely should not be underestimated. Because advertisers have greater access to data about the user, it enables personalised ads which results in a bigger chance of increasing your CTR rate. This is due to the fact that users – to a greater extent than seen before – have a need and are ready for personalised ads. The overwhelming flow of advertisements dominating the internet makes it easy for ads to be overlooked. However, if the ads are targeted at the specific user it is more likely that the user will not just scroll past the ad but instead will become interested and click on it.

Using data to shape the creative process in the development of the banners rather than letting it dominate them is the ideal result and what any advertiser designing DCO banners should strive for. In an era of ad blockers, DCO banners, which are indeed targeted to the user in a sophisticated way, have never been more relevant.

Although personalised ads are considered somewhat invasive to a certain extent and resulting in some users feeling monitored, surveys have found that a large proportion of users find it both useful and helpful to be exposed to ads that are relevant to them specifically. Making use of DCO banners is therefore a win-win, as it for you as an advertisement increases the CTR rate, while you at the same time are meeting the needs of the users.

Here you see an example from Sportmaster.

Imagine that you want to create a campaign with all your products that have more than 20% discount – this can e.g. be for Black Friday. All you have to do is filter your product feed – select the relevant products at a discount. Either by a filtering rule – or by just selecting them manually.

Once this is done – then drag the product feed into the banner template – it sounds difficult, right?
Wrong – it’s super easy – and here’s an example of a high quality DCO banner.

DCO in the short term

The use of DCO banners in various forms is slowly gaining momentum and is seen, among other things, already incorporated in the advertising of streaming services. The spread of the ad type is thus becoming more and more mainstream, which testifies to an advertising type that has great potential and value.

Because the average user generally speaking gets increasingly more exposed to ads, the competition for advertisers is also becoming harder. In the ocean of ads out there, we all want to be seen and sell our product or our brand. One way to achieve this is by considering intelligent ad forms such as DCO banners. If you use data to gain more knowledge about your exact customers and you with that knowledge create creative banners that leave an impact, you decrease the risk of your ads being just another one in the crowd.

While the need for creative and relevant ads is increasing, we are also experiencing AI becoming more and more extensive. For you as an advertiser, this results in the toolbox for collecting information about the user, being expanded and a greater opportunity for developing ads adapting exactly based on the information thereby flourishing.

DCO banners are an extremely efficient form of advertising that in most contexts makes sense for you as an advertiser to make use of. Take part in the fact that we live in a time where AI is helping us gain knowledge about our customers and leverage your production to both create a more relevant ad flow for the users while bringing green numbers to the bottom line.

Are you curious about learning more about the production of DCO banners? Chat with us right here – we are ready to answer your questions! ?